Hour of Code: My Kids WILL CODE!

We missed the first 2 days of Computer Science Education Week because we had Snow Days. As much as I enjoyed those two days off , I was kinda bummed about not being able to have my class participate in the Hour of Code.

Wednesday, I had to leave early to attend a meeting, so we couldn't do it then. 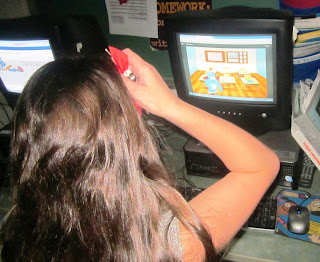 Thursday, I made sure it was part of our day.

I began by discussing Computer Science Education Week (ho hum), and then segued into coding, (bodies fidgeted, eyes lit up, "Can we do that?"). I put  the Youtube video up on the Smartboard, lights went out, and 20 bodies grabbed carpet squares, bean bags, and video chairs and plopped themselves in front of the board. Amidst shouts of "Shakira", "Ashton", "President Obama!", and other assorted celebrities, I think they got the gist of what this coding thing is all about.

At the end of the video I yelled, "Is everyone ready to code?!" and a thunderous "Yeah!" rolled over me. Bodies flew to Chromes, desktops, and laptops to sign up for Tynker. I was prepared, I had placed the code for our class on Edmodo. (easy-peasy, lemon squeezy).

When I tell you they were excited!!!! Two or three were able to log in,("Mrs.M, I'm in, I got on!"), the rest were disappointed. I explained to them that people all over the world were trying to do the same thing they were, at the same time. The ones who got on went from "What do I do?" to "Hey, look what I did!" in the blink of an eye. My babies never cease to amaze me. Watching them sit and actually watch the tutorial was pleasure enough.

This is not a one week event for me. My kids WILL CODE!

Next week is S.M.A.R.T Kids Day at our school. The 5th grade team set up rotations, my rotation is coding. I want to give all the kids on our grade a taste, leaving them wanting more.

I love this idea! I love who thought of this idea! We have to challenge our students. We have to make sure they have the skills for the jobs that are now, not then. We have to teach them to code!