"Cheat Sheets" Saving My Voice and My Sanity! 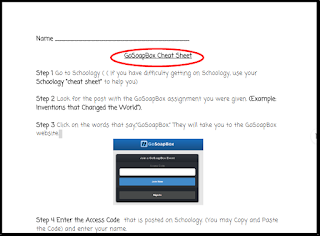 So, during the post observation my administrator suggested that I create "cheat sheets." I  said, "I keep telling them how to do it, they should get it." And then, I went home and created the "cheat sheet", and I have been doing it ever since.

I make "cheat sheets" because, eventually, whether it's the 2nd time or the 20th time, the student is going to figure out how to get on, log in, post, or whatever it is you want them to do. And when they don't, they won't have to ask you, because they have something to turn to besides you or another student.( I do have "techsperts" in my class, but their purpose is not to help every single time a student has an issue, especially when they are trying to complete work themselves.)

Instead of having to walk over to the students's desk, I would say, "Didn't I give you a cheat sheet for that?" They would look at me, realize I wasn't coming over to take them step by step through the process for the umpteenth time, and find their cheat sheet, (which is should be glued in their notebooks), and do it themselves. If they lose it, they have to borrow one, I do not make more copies.

Eventually, they don't ask me. Eventually, most of them don't need the sheet.

Of course, you can always make a screencast, (video), that can accomplish the same thing, but I prefer paper in a notebook.

Tips for creating a cheat sheet:

Email ThisBlogThis!Share to TwitterShare to FacebookShare to Pinterest
Labels: back to school, cheat sheets, directions for students, screencasts 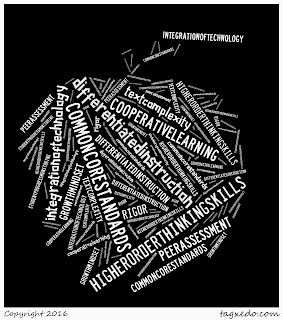 
(: BWLD) today introduced a limited-time, 15-minute lunch guarantee across nearly 900 U.S. restaurants, designed to show time-strapped Guests that they don't have to sacrifice quality, value or variety for speed at lunch time.

"We want to prove to our Guests that they can get the  experience they have come to know and love within the limited time they have for a traditional lunch break," said , vice president of food and beverage for . "Our standard was already to deliver Fast Break meals within 15 minutes, but the new guarantee adds a promise to our Guests, and some fun, friendly competition."

"Servers will start a timer when they leave the table and stop the timer when the food is delivered. Any Guest who doesn't get their meal in 15 minutes gets their entire meal and any fountain soda for free."

Every time I hear this commercial I cringe. It reminds me  of the way teaching is handled today, top down. Orders, or "suggestions" from someone who is not actually in the field. A  "great idea", that those  in the field are forced to carry out.

Those poor servers. Our poor teachers.
Our guests are our students. I worry that every time we teach to tests or switch to the latest tend teachers are sacrificing quality, value, and/or variety. If a teacher is juggling all the latest and greatest ideas handed down from above, can they really do their best? Can they get it done in "15  minutes", and get it done well? If they are constantly rushing to pick up the next order, where is the time to connect?

Fun, friendly, competition? Is it really fun to know that if you don't get the food to a table in 15 minutes, the guest gets a free meal? I wonder who is penalized for that meal? How many times are the servers allowed to "fail" before they lose their  job? The pressure on those servers must be intense. How about the cooks? Are they taking shortcuts in order to make sure the food is served on time?

Teachers always say they wish politicians, reformers, etc.. would spend a day in our classrooms. I wonder if Todd Kronebusch ever delivered  a meal in 15 minutes?

Podcasting in the Classroom! Giving Students a Voice!

One of my classroom goals last school year, was to have my students create a classroom podcast. It was literally the end of the...