Every Kid Needs a Champion: Rita's Words and This Little Girl! 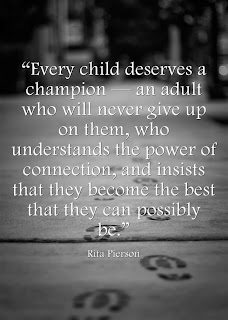 That quote inspires me.

This little girl handed me a paper with her Dad and Mom's contact information on it. It had their home phone number, cell phone number,  job number, and email addresses. I said, "I already have this information. Why are they sending it to me again?"

She responded, "Mrs.M, you have to understand, (this is how she speaks), for the past 4 years, my parents have been called for every single thing I did. They can't understand why you are not calling them."

I began on the path of champion for this little girl before she even entered my classroom.   Our relationship began the year before when she approached me with sheets of paper with her ideas for her magazine. Afterwards, I was asked to mentor her, and I tried. At the end of the year, I asked to have her placed in my class. I knew she was a "handful", but I also suspected that this image of her was not all there was.

This little girl stood up at Morning Meeting on Friday, and announced that she had the application form for staff for her magazine("KRM Magazine-Kidz Rule!") ready. She wanted to know who was interested, 1/4 of the students raised their hands. I suggested Google forms and a student willingly agreed to help her set it up. At the end of the day, she announced that the application was embedded on Edmodo and could be filled out over the weekend. Today, she announced who she had hired. My heart swells with pride about what she has accomplished, how she has turned around.


This little girl is by no means perfect, and neither am I. We understand each other. I care for her, and she knows this. She knows I want the best for her.

As we packed up today, I felt arms grab me from behind in a hug. This little girl. I am her champion. We are connected.