My Students, Dr.King, and the Civil Rights Movement. 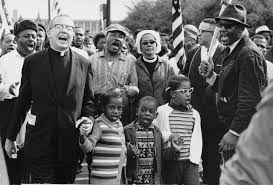 When they discuss Rosa and the bus boycott, see the photographs, and videos, their voices echo, "But that's not fair!"

As we study Dr.King, they question, "Why?"

It is so hard for them to wrap their minds around it.

I am fortunate enough to work with a diverse group of kids. In all the years I have taught, very rarely have I had to deal with racist attitudes from my 4th and 5th graders.

I believe hate is learned.

Which is why, right now, my students have such a hard time understanding why people would do that to one another, treat each other that way.

I hope when they grow up.

I hope when they get to middle school, they still find it hard to fathom why this happened. I hope that as they are bombarded with opinions  from the media, the Internet, family, and friends, they are able to make up their own minds.I hope that they remain friends, despite their differences. I hope that they fight against the ignorance, always.

I hope that the only thing that separates them is distance and time, and never race. And most of all, I hope that they never stop asking, "Why?"