"Techfully Yours" Youtube Series- Sharing My Passion for Tech One Tool at a Time!

I decided to start a Youtube series. I've always wanted to do this, but didn't have a clue how to. Also, I was in the midst of work, now it's summer, and I have some time. 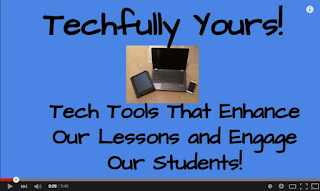 I learned about Snagit right before school ended, trying to make up those snow hours. But, it was PD I wish we had more often, something productive that I can use!

Take a peek, or two. Share with friends. Use it. Watch for new episodes. Episode 1 is about the fake tweet generator by Classtools.net.

How Many "Karen Fitzgibbons" Are Still Teaching Our Kids? 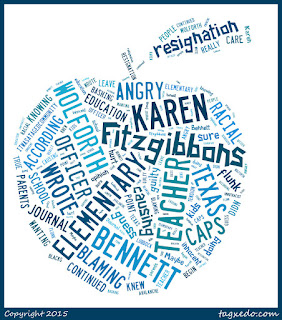 Karen Fitzgibbons, a teacher at Bennett Elementary in Wolforth, Texas, wrote that she was, in all-caps, "ANGRY" over the officer's resignation, blaming "the blacks" for causing "racial tension," according to the Lubbock Avalanche-Journal.

"I guess that's what happens when you flunk out of school and have no education," she continued. "I'm sure their parents are just as guilty for not knowing what their kids were doing; or knew it and didn't care.

"I'm almost to the point of wanting them all segregated on one side of town so they can hurt each other and leave the innocent people alone. Maybe the 50s and 60s were really on to something. Now, let the bashing of my true and honest opinion begin....GO! #imnotracist #imsickofthemcausingtrouble #itwasatagedcommunity"

As an educator, when I read Ms.Fitzgibbon's quotes, all I could think, well after my initial thought of, "What an idiot!", was about the children of color who had the misfortune to be in her class.

Didn't anyone know how she was? How could she have hidden it so well? Maybe she didn't. Maybe she didn't have to. The teacher's Wall of Silence is just as pervasive as the police. You usually have to do, or say, something horrible, for another teacher to expose you. (If you see something, say something!)

After I did some research,  I realized she probably posted it because she thought she could. After all, Wolfforth, Texas is a red state, less than 2% of the school is African-American, and the population of the town is 2.5% black. Worrying about how others would respond probably wasn't a priority.

If Ms.Fitzgibbons had chosen to speak to her friends privately about her #imnoracist viewpoint, she would have been fine. She would have continued to go to work, views packed away on a "need to know" basis. But, I guess she was so ANGRY, she was going to let the world know how she felt,(By the way, if you #imnoracist, you probably are), damn the consequences.

I don't believe she really thought there would be consequences.She could say what she felt about "the blacks", and everyone would cheer her on. Kudos to those who called her out, and kudos to her district for firing her!

Ms.Fitzgibbons, maybe you should have read your district policy before you posted your vitriol.

Here's the thing, Ms.Fitzgibbons is not alone. In a world where the majority of public school students are children of color, and their teachers are white, there are one or more in many schools around the country. The only difference is, most have enough sense not to post it on Facebook. They save it for the Teacher's Lounge, or vent in the privacy of their homes.

These "Karen FitzGibbons", destroy children of color, one day at a time. Put-downs, insults, and sarcasm are their weapons of choice.They label them Special Education at the drop of a hat, dole out multiple suspensions, advise parents, (although they have no medical degrees), to medicate their children,  keep them out of gifted programs and AP classes, and/or tell them they cannot go to college.

It's not difficult to get away with these attacks, because, for many reasons, parents of children of color, do not, or have no idea how to, advocate for their children.
So, it continues.

Reread Ms.Fitzgibbons' views, they are so full of hate. What type of influence did she have on her students' views toward people of another race? What chance would a student of color stand in her classroom? Do you think a teacher like Karen Fitzgibbons is a fluke?

Posted by Lisa M at 3:03:00 PM 1 comment:
Email ThisBlogThis!Share to TwitterShare to FacebookShare to Pinterest
Labels: Karen Fitzgibbons, racism against students of color, racism in the classroom, teachers and social media

End of Year Projects:Survival Guide for Incoming Students and a Memory Book!

I realize that many teachers are already on vacation, so this is for those of us who are still working our way to the end of the year. :) Or, you can always use it next year. 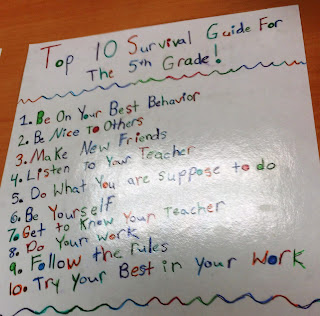 ____th Grade Survival Guide
This idea comes from my teacher-friend, Angela J. She was eating lunch, laminating, and cutting these out , when I spotted it. Since I'm changing grades, I can't "steal" Angela's idea, but, next year...
She was so kind to tell me she didn't mind if I shared her idea with my readers.:)

It is a survival guide for the incoming students. She assigned one sheet to each student and asks them to write the Top 10 tips to survive the 5th grade. Of course, there are so many modifications to this to be thought of, video, booklets, use your imagination! Angela said she leaves the book out, so that the incoming students can read at their leisure, or she might read it out loud to them.

Great idea! I usually have the students write a letter, but I think the incoming students would enjoy this more.


"Remember the Time When"...? Memory Book

I wrote an entire blog post on this one last year.  Click on the link to take a look at how we have done it differently this year. I gave each student their own page with their name at the top.