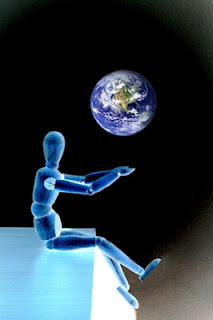 So while eavesdropping,listening, I heard a conversation between a man, who was sitting with his son, and the waiter:
Man(American): What's your name?
Waiter(not American)responded with his name.
Man: Good. You have an easy name. Most of the waiters on this ship have difficult names.
Waiter smiles and walks away.

I wonder what the waiter would have said if he did not have to remain professional? I know what I wanted to say.
"Hey you, do you realize that everyone in the world does not have "American sounding" names and that there's nothing wrong with that?
Do you realize that your name is probably "funny sounding" in another country?
Do you realize what lesson you have just taught your son?
Do you realize you just insulted the waiters on the ship because you feel they don't have names that you can easily pronounce? Well, shame on their parents for making life difficult for you!

I attended the Edmodocon conference the other day. As soon as the Australian presenter started speaking, complaints were made that she was speaking too fast. Do Americans have any idea how fast we speak?
Some Australians at the conference were offended. The presenter apologized for speaking too fast, and jokingly said she had a "funny" accent. Why did she apologize? She was speaking with an Australian accent. Just as they made an effort to understand others, we should have done the same.

I say all this to say, this is why I make sure my students are global learners. This is why I take advantage of Quadblogging, Skype in the Classroom, pen pals, and my Twitter PLN. Last year, my students read blog posts of kids from New Zealand, Australia, and England. Talk about knocking down classroom walls!

I know as my students get older, they can change. But for right now, I want to them to understand that Delaware is not all there is. The USA is not all there is. There is an entire world out there where people do not speak "funny", they just have different accents. That there are cultures that are completely different from ours. Their names, food, and customs are different, but at the same time, we have a lot in common.

I am going to do my best so that my students do not become the "Ugly American", but instead be the American that understands that the world is full of people who are different from us, but that it does not make us better than them. Hopefully, what they learn now, meeting other students all over the world and country, will allow them to be open-minded, fair, non-judgmental citizens of the world.