In Defense of the Teacher's Union! My Union is OK with Me! 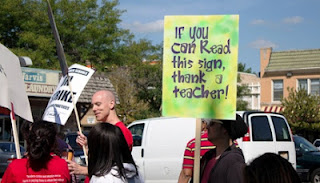 She said I caused her daughter to have an asthma attack. She went to the principal and her child's teacher, told them I was "uppity", and that she was going to cause problems for me. She walked into my classroom and started yelling, and I had to have her removed.This occurred about 2005.

My former principal suggested a meeting, I agreed.  I loved my principal as a person, but as an administrator, well... I told him I was bringing my union rep. He told me I didn't need her, it was just a small meeting.  I ignored him. I explained the woman's behavior to my union rep and we agreed that if she became offensive, I would excuse myself from the meeting.

The principal said his piece, and asked the parent to respond. She stuck her finger towards my face, and said  "You have an attitude and you need to fix it!" I got up and walked out.  My union rep said she threatened to get her lawyers.  My union rep told her to go ahead. That was the end of that.

What would have been the outcome if I did not have union support?

I started thinking about the power of my union after I read an article written by an NEA member. But, it wasn't the article that struck me, it was the myriad of negative comments about the union that followed the article. What did the union do to these people to make them so...so harsh?

Unions = power, and I don't see anything wrong with that. Unions = power, and that is what scares many politicians that are fighting to get rid of them. It's not the teachers' union vs. teachers vs.children, as some might have us believe. We are not helpless sheep being led by the nose by the big,bad, unions. The teachers' union represents us, each of our voices raised as one, providing the chance to be heard!

I was listening to two DJs comment on the Chicago strike. One of them, the daughter of a teacher, the other, a DJ.  He thought the teachers should go back for the "greater good" of the students. He should read this article.  The teacher's daughter let him have it, "teachers don't do this for the money, but they deserve to get paid for what they do!" Amen! Thousands of teachers are on strike, a decision I am sure their union did not come to lightly.

I thank my union for my pension, the hours I work,(although I mess that up every time I work from home or stay late), my salary, my contract, auto and home insurance discounts, and yes, my $1.00 off Coldstone Creamery ice cream. :) You get my drift.

Are they perfect?  No, because they are composed of people, and people are not perfect. But I believe that most of them do the best they can to protect us, to be that voice for all of us, to be our David in the face of the multitudes of Goliath, (parent, principal, or politician), we face each day we walk into our schools.