"They Did Not Choose Their Parents!" 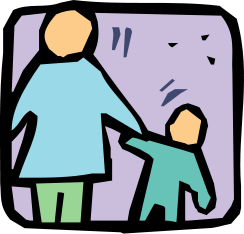 These words were spoken at the 2011 PLC Summit I attended in Arizona.  "They didn't choose their genetic pool". "They couldn't say I want two college-educated parents who love me, care for me, and make education my priority."

I realized after hearing this statement,  that many times, I get frustrated with my students  about things over which they have no control.  When they come to school without school supplies,  their parent doesn't sign a form, or  misses a scheduled appointment, or has made the child stay home to babysit, again.

These are things that the student can not control, but yet, year after year, my frustration is placed on a  child, who is probably just as frustrated as I am!  How many times has the child walked in the day after parent-teacher conferences, and I've said, "Your mother scheduled an appointment and didn't come"  The child stands there wide-eyed, not knowing how to reply. Maybe they know why, maybe they don't,but  that's not the issue.

We need to work around the parents who are not supportive, the ones who just don't have the time.  We need to tell our children, "You do you."  "You do what you need to do to succeed."  Let's not hold them accountable for the mistakes, or neglect, of their parents and guardians.  Let's not make them bear the weight of their parents' transgressions.  Why say to a child who is late every day, "You're late again." Knowing  the only way the child can get to school is if their parent drives them.


So, I decided to look at this, "blaming the child" thing, I had going on, another way.  I had a student who was out every Monday.   I would fuss at him every Tuesday about the work he had to make up or fuss at him because he didn't understand what I had already taught.
"Well", I would say sternly, you need to be here on Mondays."


The following week, he came to school on Tuesday,  and instead of a  "Glad you could make it", I smiled and said, "I am so glad that you're able to be here today."  His face lit up with a smile,  and he said, sincerely, "So am I."   Instead of fussing, I worked with him and helped him catch up. Changing my attitude, changed his behavior. Even other teachers and my former principal commented on the change in this student.


Was I a" bad" teacher? I don't think so, but I certainly wasn't the best I could be. I'm still learning though, and I'm willing to take a good, hard, look in the mirror, and correct my mistakes.

Reopening Schools: A Decision to Die For!

Would I die for my students?  Probably. Teachers have placed themselves in harm's way for their students countless times. But, ...