The other day my teacher-friend and I headed down to the beach. We make the journey once a week to sit on the beach and relax, enjoying the view of the ocean and the warmth of the sun. During the week, it's not too crowded, but people still have to sit pretty close to each other.

We left the beach to grab some lunch, and by the time we returned, the family that was in front of us had been replaced. It was a family group, the grands, the children, and the adults that belonged to the children. I thought I was going to take a nap, but instead, I watched the dynamics of two of the children, the boy appeared to be about 6,  the girl 4 or 5.

Watching these two children brought out the "teacher in me". During the thirty minutes I watched them, my teacher-friend would look up from her book, and say things to me, "Don't say anything." Or, "Take your nap.",  At one point her "teacher" also came out and she said, "Did you hear what she told the girl?" It was like watching a train wreck, I couldn't take my eyes off of them.

Of course, I wouldn't say anything to the parents, although the "teacher in me" wanted to. But people nowadays are crazy, and constructive criticism could lead to a path I did not want to travel. BUT, if I could have said something to the parents, the first thing I would ask is for the Dad to put down his phone, stop texting, and help the Mom/Auntie with the kids.

Here are a few questions I would ask the Mom:

Do you realize that if your daughter screams, and slams her body down on the ground because she wants something someone else has, the teacher probably won't give it to her?

Do you realize that the teacher is probably not going to force the other child to give it to her? What will your daughter do then?

Do you realize that the other child is now angry? (And maybe that's why later as you packed up, he kept throwing her in the hole you dug, and wrapped his towel around her neck, and told you he was "just playing".)

Do you realize that when she is doing something wrong to another person, there will be consequences? No one is going to ask the other child to get out of her way.

Do you realize how hard it is to enjoy being around a child who repeatedly whines, and fake cries, each time you say no?

Do you realize that sometimes you have to actually solve conflicts, not just give in because it's easier?

I could go on, but I think those questions could help her rethink the whole parenting strategy she had going on. You never know, maybe, the Mom just reacted the way she did because they were in public. Maybe the kids are/will be well-behaved in school.

But as I watched the scenes play out, I kept thinking about the type of behavior these children might exhibit in a classroom. What an adjustment for that child, when the adults do not react the way Mommy does.

I never did get to take my nap. Yes, I should have just closed my eyes, and minded my own business.  But unfortunately, the "teacher in me" had other plans. :)

Posted by Lisa M at 1:04:00 PM
Email ThisBlogThis!Share to TwitterShare to FacebookShare to Pinterest
Labels: adjusting to school, Diary of a Public School Teacher, education blog, teacher in me, teachers never stop being teachers. teaching children before they go to school

One of my best friends and I were sitting around talking and the conversation turned to IEPs. Let me put this in perspective. My friend i... 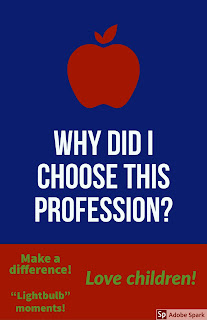