Paper,Pencil,Crayons, Learning and Fun Projects Without a Computer! 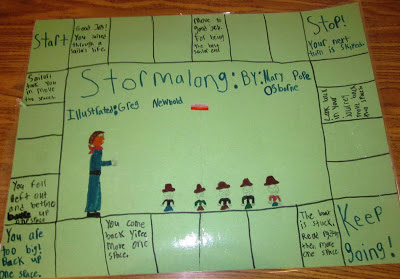 Cause and Effect Board Game

Not an original idea, but a good one, nonetheless!

It was one of the ideas that was suggested for the "Green" group in the Harcourt Storytown series. I think it is a marvelous way to extend thinking!

The students chose events from the selection, "Stormalong." Each event(cause) was written in a space with a matching effect.  For example; "You win a fight against the octopus, move ahead two spaces." The middle of the board game has an illustration of a scene from the story.  Some of my students got creative, and made sailing ship pieces, how cool!

You can use this idea with any selection, and I am sure it would work with any strategy or subject you are teaching. 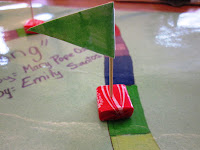 It was an enjoyable break from the usual tech projects we complete. (I want to make sure my students realize we don't have to do everything on a computer.) The kids had a good time completing it and
now the fun part ,playing it! :) 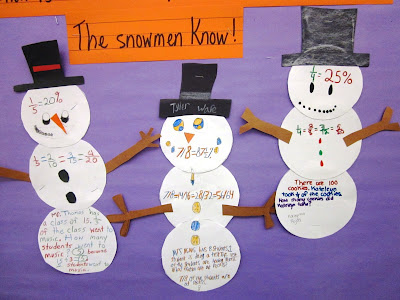 I wanted to give my kids a mini-project to do with fractions. So, we made these wonderful snowmen! His/her head has a fraction and percent equivalent. The middle demonstrates equivalent fractions. And the bottom is a word problem created with the fraction of their choice. They also had to solve the problem. We looked for things that had the shape of a circle, and passed it around.

The students had to do the work before they were allowed to transfer it to their snowmen. They liked it so much, most of them took it home and finished it!:)


I am a tech nut, but sometimes I just like to go "old-school!"
Posted by Lisa M at 6:31:00 PM
Email ThisBlogThis!Share to TwitterShare to FacebookShare to Pinterest
Labels: cause and effect, classroom projects, creating board games, equivalent fractions, no-tech projects