I don´t remember if I saw it in an email or on Twitter, but the Postcard Exchange project caught my eye. It was sponsored by @techTOSAGina. This was her first one, as a matter of fact. Each teacher would be responsible for sending out 50 postcards to all the other classes on the list. 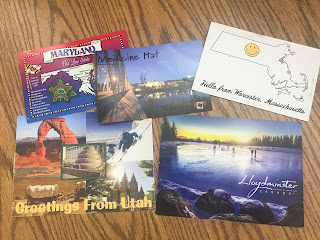 I decided we would create a postcard via Vistaprint, and yes the cost was out of pocket, but fortunately,Vistaprint is always having sales. And like a teacher, I  could not  just get the postcards, I added in return labels with our school name and mascot on it.
As a class, we decided what information would be included on our information sheet.

The postcards started trickling, then pouring, in. Meanwhile, I had my kids glue on the information sheets and stick on the return labels. I decided to address our postcards myself because I just felt it would be quicker. Unfortunately, it was not. I am a procrastinator, and ended up addressing them a while after they were due.:( But, I did send them.

As I collected the postcards, I kept trying to think of a way this could be more than a bunch of postcards we glue on the wall. And wouldn´t you know? A teacher shared her idea. She created a Google Slide presentation, and the kids added the info they got from their postcards. If they didn´t get enough info, they did the research and supplied it themselves. Another teacher created a Google Tour 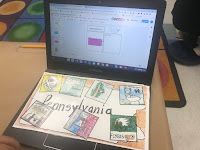 using the addresses of the schools.

My kids are still working on their Google Slide presentation, and they are really enjoying it! They talk about the facts they learned about their states with their peers and I. When they were done, they asked for more cards to fill out another slide. They enjoyed finding out how many miles away they were by car, walking bike, etc... 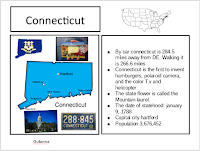 I´ve never used Google Tours, but I am going to give it a try.Really doesn´t matter, once I give it to the kids... For example, I told them to add a picture, they found a much more creative way to add images to the slides.
Looking forward to doing this again next year!

Interested in creating your own Postcard Exchange? Here´s some ideas!