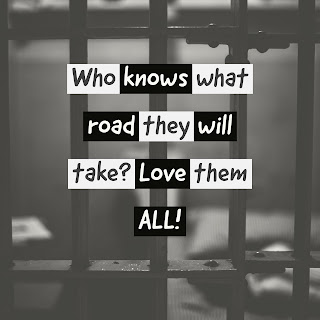 I have to be honest.
For a number of years I was that teacher. The one who prophesied the negative places kids would end up.
"Yeah, he'll be in jail in about two years."
"She'll be pregnant in middle school."
Sometimes my prophecy would come true, and fortunately, sometimes it wouldn't.

And even though I avoid saying those words out loud, I sometimes think them. The good part is, I work hard on trying not to make it a reality. I talk to those students I harbor those fears for instead of waiting to see if my fears play out. You see, as I grew as a teacher, my prophesies became fears. I feared that the student would go to jail. Feared that that student would be a teenage mom. And while I am no miracle worker, I hoped my actions, while they were in my class, would somehow help to change my perceived outcome for that child.

All that is to say,there are children you fear this might happen to. So, I was totally unprepared when this particular child's mug shot stared back at me from my screen. I cried.Hard.

And it's not that he was better than any of the others. But my perception of him made me think he was not one I had to worry about. As a 5th grader he was polite, respectful, and so bright. I envisioned a great future for him. His mom was so supportive. I remember when they moved she sent me pictures and a letter thanking me. I still have it.

As a matter of fact, I saw him as a young man, working diligently in BJ's. It's always a great experience when you run into former students, grown. He told me how he was doing, his plans for school, etc... We would see each other often because the store was near the school. I hadn't seen him in the last few months, so I assumed he had changed shifts.

In December, I ran into him at the city courthouse. We had taken the students to see the reenactment of "Miracle on 34th St." As we stood in the lobby, I noticed this young man at the same time he noticed me. His head went down. He had to walk past me. Couldn't avoid me. Felt the need to explain it was a traffic violation, and it wouldn't happen again. I hugged him, told him it was ok, and sent him off with a motherly, "Just don't let me see you back in here!"

And now. A mug shot. Charges. Way more than a traffic violation. Jail. The "good" kid.

What happened between 5th grade and 26 years old? What choices led to this?I keep asking myself these questions and I can't answer them.

This is my wake up call. The "good" kid is in jail. I will no longer harbor preconceived notions, I will pray for the best for all of my students.