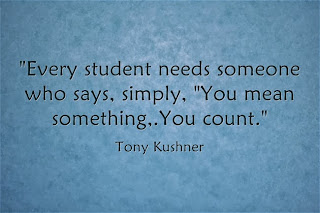 A conversation in a workshop, in a classroom, in a school, in a district, in a city, in a state, in our country. An unfortunate conversation that has probably been repeated many times across the U.S.

Discussing a real world problem while teaching volume:
Presenter/Teacher:  We need to give the kids a real world application. I think this problem would be great for that.
Teacher 1:  Yes, that's an excellent way to teach that concept.
Presenter/Teacher: After all, let's face it. These kids will probably be filling boxes for a living anyway.
Teacher 2(indignantly) :  I don't know what kids you're talking about! The kids in my class are going to be future presidents, or CEO's!
Presenter/Teacher:     (crickets)

And that's who we should be teaching, future presidents. Future CEO's, astronauts, computer geniuses, authors, and inventors. That's how we should be teaching, as if the future is theirs for the taking. As if this is what we are preparing them for. Is there only one type of kid who gets to be taught this way?

If it has already been decided that there is not much that will come of their lives because mom is a single parent, they are African-American, Mexican, poor "white trash" , living below the poverty line, dad is in jail, grandma is raising them, or any of the other reasons teachers have used to crown themselves foreseers of the future of their students' lives, then that is how they will be taught!

They will not be challenged. The expectations for them will be little or none. When they ask for challenges, they will be dismissed. They will become a "population" of students of which nothing is ever expected.

And unless, they get a teacher or a mentor who will treat them as if they can be somebody, their life is destined to be where that  teacher said it would lead. Then in a few years, that teacher can pat them-self on the back and say, "I told you so!" smiling smugly, satisfied.

Will some of them end up working in McDonald's? pregnant? Of course, life happens. But while they are in our care, while they still have a chance, let's teach them as if they a future president!